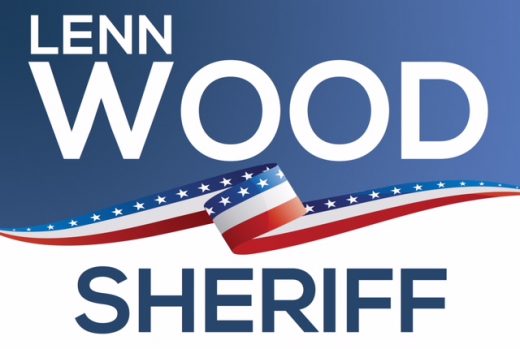 I am Lenn Wood, and I’m asking you to support me by voting for me to be your Sheriff of Coweta County in our primary election on May 19, 2020.

My first assignment was a patrolman.  My duties were like any other patrolman so many decades ago but I felt that this was different.  I was serving and protecting the community who helped raise me. I believed that I was paying it forward to so many people who shaped me into the law enforcement professional that I am today.  Sometime later, I was promoted to desk sergeant with the police department.

Soon after that, I received another promotion as a detective sergeant.  As a detective sergeant, I was tasked to investigate and clear complex criminal cases that occurred within the city of Newnan.  Although every case wasn’t high profile, I treated every assignment as though it was the only case that I was investigating at the time.  This position really seasoned me as a police officer because I was able to see nearly every kind of criminal activity and it was my job to catch criminals who most times were ahead of the game.

In 1995 Sheriff Mike Yeager met with me and offered me a position as an investigator with the Coweta County Sheriff’s Office.  I had and still have the highest regard and respect for Sheriff Yeager; so deciding to accept the opportunity to work with him was made very quickly.  My duties as an investigator were nearly identical to my previous position with the City of Newnan.  So effectively serving the residents of our county came very quickly.  After serving diligently with the Sheriff’s Office, I was promoted to Lieutenant and Team leader with the School Service Unit.  My job was to oversee the School Resource Officers, develop job duties and descriptions, and work with the school system to ensure the safety of the students and staff at all the schools we served.  I also oversaw the D.A.R.E. and S.A.F.E. programs that have proven to be successful and impactful with thousands of students within Coweta County.

My next assignment was to create a training unit within the Sheriff’s Office.  Sheriff Yeager and I believed that is was essential to train our employees in-house as well as sending them to state academy level advanced training.  From its inception until now, the Sheriff’s Office has three full-time instructors and over 20 adjunct instructors who can teach every Division.  The training unit also oversees our Field Training Officer Program (FTO).  The FTO program is one of the most difficult programs in the state and its design was to ensure that each deputy is prepared to meet and exceed all the demands in the community before they’re released to work alone.

My next challenge would be serving as the Assistant Director over the Jail Division.  My job was to support the jail staff, ensure that the jail was secure and that the inmates were treated fairly.  The Jail Division Director allowed me to develop as a leader within the Jail Division and upon his retirement, I was promoted to Director over the Jail Division.  I served the members of the Jail Division for several years until Sheriff Yeager asked me to serve as the Director of Court Services Division.  As Director of Court Services, I oversee all the courts and hearings that take place within the county and I’m responsible for the security of all the Judges, attorneys, employees and thousands of citizens who visit the courthouses on a daily basis throughout the year.  I still oversee the Court Services Division and I’m also the Chief Deputy of the Sheriff’s Office.  As Chief Deputy, my primary duty is to oversee all the operations of the Sheriff’s Office and assume the responsibilities of Sheriff when he is away from the community or in his absence.  The Chief Deputy position is the highest position under the Sheriff and it carries with it the responsibility to ensure that the Sheriff’s vision for our Agency is carried out.  He implicitly trusts me as his Chief Deputy that all of our citizens with be treated with the highest level of respect and professionalism that he and I expect in every encounter every day of the year.

During my nearly 40 years of law enforcement service, I have served and led in every division of the Sheriff’s Office.  Our office is composed of the Patrol Division, Jail Division, Criminal Investigation Unit, School Resource Unit, and Court Services Division.  Each Division carries with it its own unique duties and functions that requires real hands-on experience to maintain the highest level of professionalism that our community expects.  The Sheriff’s Office serves nearly 145,000 citizens and I have worked with county government to grow our Divisions to meet the needs of all of our community.  The Jail Division and Court Services Divisions are the second and third largest Divisions in our Agency and I have successfully served and led them as the highest level.  As Chief Deputy, I work for and serve over 250 Team members at the Sheriff’s Office.  Each member is unique and has their own goals that they would like to achieve.  It is my job to ensure that each member achieves their goals while fulfilling the needs of the Sheriff’s Office.  I have proven ability to lead this Agency, all of its Divisions and all of our Team members as Chief Deputy at a level that our community expects.  Because of that, they are actively working alongside us to protect our community.  As your Sheriff, there won’t be a period of adjustment to learn how to lead this large Agency because I have been a part of it since 1995 and I’m keenly aware of all the people and all of the positions that it takes to maintain a high performing Team.

I am a Servant to my family and my community.  I have been married to my wife Theresa for 40 years and she is just as committed to Coweta County as I am. I am fiscally frugal with the tax payers’ money now and I will continue to spend your money wisely to gain the greatest affect with the least amount of money necessary.  I believe in the Team of Professionals who work here now and I’m committed to growing each of them professionally through advanced training, leadership development, and mentoring.  As a final thought, I have served at the Coweta County Sheriff’s Office for 23 years now and I am just as eager to serve you today as I was 23 years ago.  So I again respectfully ask for your support by voting for me, Lenn Wood, as your Sheriff of Coweta County.